THE NEW STANDARD OF EXCELLENCE

Switch invented the Tier 5® Platinum standard because Switch data center designs, facilities and operations far surpass the highest data center benchmarks available. Switch’s CEO and Founder, Rob Roy has continued designing, building and operating data centers since 2000. Rob Roy has well over 700 issued and pending patent claims that protect his vision and inventions. Accordingly, for nearly two decades, Switch’s data center and telecommunication technology and services have been praised as Tier Elite® – above and beyond any current tier metric.

As demonstrated by the foils below, in 2014, Switch became the first and only carrier-neutral multi-tenant/colocation facility to be certified “Tier IV Gold” by the Uptime Institute. In 2016, Switch became the only entity to do so – for a second time. For each facility, Switch obtained certification in both Design and Facility categories. Switch then underwent a rigorous analysis of its operational teams and was awarded “Tier IV Gold” certifications for Operational Excellence by the Uptime Institute.

Switch pursued industry certifications to provide clarity to those less familiar with data center technology. Switch also wanted to ensure no one was misled by less-than-truthful competitors misrepresenting the quality or reliability of their facilities. To continue its pursuit of building the world’s best data centers, Switch raised the bar beyond current industry standards with its Tier 5 Platinum data center standards.

Switch obtained the Uptime Institute Tier IV Gold certifications in 2014 and 2016. Since that time, Switch became concerned that other data center standards fail to provide sufficient transparency or accountability. Thus, Switch identified additional elements it has practiced for years that are central to mission-critical reliability in the increasingly dynamic data center ecosystem needs of today.

Tier 5 Platinum not only encompasses the resiliency and redundancy in other data center ratings systems, but also evaluates more than 30 additional key elements, such as long-term power system capabilities, the number of available carriers, zero roof penetrations, the location of cooling system lines in or above the data center, physical and network security and 100-percent use of renewable energy.

“The original data center standards were created for legacy data centers in the early 1990s,” said Samuel Castor, who helped formalize Switch’s new Tier 5 standards in partnership with Switch’s engineers and under the direction of Rob Roy. “The spectrum of data center options has greatly expanded since their creation. Customers can now choose between a broad array of options, from in-house, to carrier, to colocation, cloud or managed service offerings. The common core of each of these offerings needs to be much more than just power and cooling. The underlying infrastructure must contemplate security, connectivity, sustainability, optionality and independence. To be helpful and relevant, our industry standards must be expanded as well.”

Industry experts and users alike understand that major threats to data center uptime include water damage, reliance on too few telecommunication carriers, being located in a high-risk geo zone, and inadequate physical and network security. These mission-critical elements are not being evaluated in other data center rating systems. Switch believes this lack of transparency and holistic relevance makes it difficult for CTOs, CIOs and data center managers to understand the deep dive differences between colocation product offerings when selecting a provider. Switch introduced the Tier 5 standard in an effort to reduce the lack of transparency and enhance the reliability of data center rating standards.

Castor continued: “A tidal wave of technological change has been cresting. When the original data center standards were developed by Hank Seader and Ken Brille back in the early days, no one envisioned the world would evolve as much as it has. It is now more critical than ever for customers to have transparency into the sustainability and reliability of their data center service providers. Switch’s Tier 5 standard focuses on improving the transparency and accountability of such an important and mission-critical part of all of our daily lives, the infrastructure that supports the Internet of Absolutely Everything.” 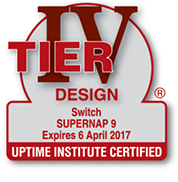 Switch’s Tier 5 Platinum guarantees that a data center’s power and cooling systems are fault sustainable, but also guarantees many other elements critical to support the Internet of Absolutely Everything®. Switch’s Tier 5 Platinum contemplates internet connectivity and reliability of carrier services, physical security, regional disaster risks, and the sustainability and energy efficiency of a facility.

A detailed comparison between the Tier IV standard and Switch’s Tier 5 standard is available here.

Beyond the Tier 5 Platinum standard, Switch sees the need for industry alignment and self-regulation. To that end, Switch has worked with industry leaders and specialists in all verticals to create a new, independent, non-profit standards body for the data center industry. Known as the Data Center Standards Foundation, or “DCSF”, the foundation and its new version of data center “Class” standards, provides much needed transparency into the reliability of data center offerings to help the industry self-regulate and safeguard the data of all humans relying upon the digital framework that supports our modern world. DCSF enables data center users, owners, and operators to self-assess the rating of their data centers, clearly represents and warrants that rating, and allows independent third-party audit to verify that assessment.