Switch, builders of the world’s highest rated data centers, announced plans for its SUPERNAP Michigan data center near Grand Rapids to be powered by 100 percent renewable energy. As part of this announcement and Switch’s continued commitment to run all of its data centers on green energy, Switch has also become a member of the WWF/WRI Renewable Energy Buyers’ Principles. The Buyers’ Principles were established to articulate the common needs of large renewable energy buyers. The goal is to spur progress on increasing access to renewable energy and to add the perspective of large entities who intend to go green or who have already gone green, such as Switch, to the future of the U.S. energy and electricity system.

Switch has begun working with local utility Consumers Energy to develop a comprehensive plan to power SUPERNAP Michigan with 100 percent green power. This is following the announcement earlier this month that all of its SUPERNAP data centers in Nevada are now powered with 100 percent renewable energy.

“Since our first contact with Switch, Consumers Energy understood the importance of building new renewable generation to provide Switch with 100 percent renewable power at their SUPERNAP Michigan data center,” said Garrick Rochow, Consumers Energy’s vice president and chief customer officer. “We are excited to partner with Switch to make the largest data center in the eastern U.S. the greenest.”

Joining the Buyers’ Principles is a continuation of the major public commitments Switch has made to sustainability over the last two years. During the 2015 National Clean Energy Summit 8.0 held in Las Vegas where President Barack Obama was the featured keynote speaker, Switch became the first data center provider to join the American Business Act on Climate Pledge.

“Sustainably running the internet is one of the driving principles of Switch, which is why in our site selection process for an eastern U.S. SUPERNAP data center site, we had to find a local utility who could provide a pathway to 100 percent renewable power,” said Switch EVP of Strategy Adam Kramer. “When we first met with the team at WRI we knew that our goals aligned perfectly with the Buyers’ Principles, which is why Switch was excited to join.”

By joining the Buyers’ Principles, Switch will contribute its knowledge on how to create green energy tariffs and procure new, local, renewable generation with other companies who share Switch’s commitment to environmental sustainability.

Switch’s Adam Kramer will be the keynote speaker at the 3rd Annual Michigan Energy Conference in Detroit on February 2nd.

About Switch
THE TECHNOLOGY SUSTAINABILITY COMPANY.

Founded in 2000, this global technology solutions corporation is built on the intelligent and sustainable growth of the internet. Switch’s patented data center ecosystems are globally recognized for their revolutionary high-density design, superscale cloud campus, unparalleled telecommunications services, and industry-leading sustainability. Through the evolutionary vision of Rob Roy and his inventions, Switch’s facilities stand above the rest of the data center industry by solving the technology needs of their 1,000+ clients for the sustainable deployment of their financial, intellectual and environmental resources. Since their inception, Switch’s SUPERNAP facilities have supported the future-proofing of their clients’ growth and innovation.

MOTIVATED BY INVENTION. DRIVEN BY PERFECTION.

Visiting #LasVegas for #HPEDiscover? Don’t miss the opportunity to take a guided tour of the world's largest technology ecosystem during your stay! Book a tour of @Switch's Core Campus and see what makes us the highest rated #DataCenters: https://t.co/XnX44WHBQi 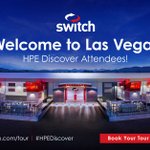 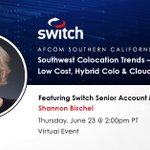 Welcome to Las Vegas, Amazon #reMARS attendees! Enhance your trip with a guided tour of the world's largest technology ecosystem and see for yourself why @Switch is trusted by the world's leading enterprises and Fortune 100 companies! Book your tour here: https://t.co/fSnsRFq1Zw 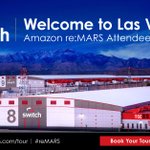 Are you traveling to #LasVegas for #HxGNLIVE? Don’t miss the chance to see the world’s largest technology ecosystem located just minutes away from the Las Vegas strip! Book a tour of @Switch's Core Campus here: https://t.co/AY7rthAl67 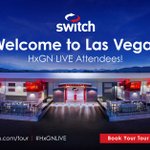 #ConnectIT22 attendees! Book a tour of @Switch’s Core Campus during your stay in Las Vegas to see where the world's leading enterprises and Fortune 100 companies store their mission-critical data! Book your #DataCenter tour here: https://t.co/GJaj60nRaU 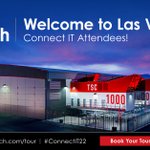 Welcome to #LasVegas, #Ascend2022 attendees! Enhance your trip by taking a tour of the world’s largest technology ecosystem located minutes away from the Las Vegas strip! Book your tour of @Switch’s Core Campus: https://t.co/WKy5SOxZKw 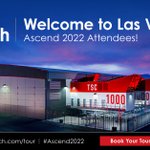 Are you in #LasVegas for #CiscoLive? Then you’re invited to take a tour of the world’s largest tech ecosystem where leading enterprises and Fortune 100 companies store their mission-critical data! Book your tour of @Switch’s Core Campus: https://t.co/dgYtE1aB2Z 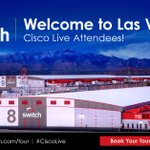